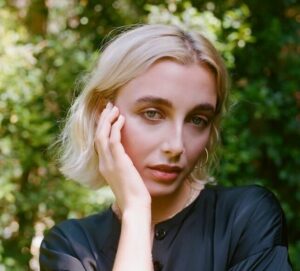 Emma Chamberlain is an internet phenomenon, fashion icon, award-winning podcast host, global brand ambassador, and entrepreneur with a combined social media following of more than 35 million. The Los Angeles-based creator never takes herself too seriously. Her authenticity and candor have landed her the cover of Cosmopolitan and Allure Magazines, as well as The New York Times, and she has appeared in W, V Magazine, Forbes, The Atlantic, Nylon, Vogue, TMRW and Marie Claire, to name a few. Elle Magazine names her a “trendsetter with palpable influence on style and culture for Gen Z.” Vogue calls her a “YouTube sensation.” Time Magazine included her in their 2019 list of The 25 Most Influential People on the Internet as well as the Time Magazine 100 Next List. Emma also landed on Forbes 30 under 30 list in 2020 for social media.